Everything you need to know about : La Galette des Rois 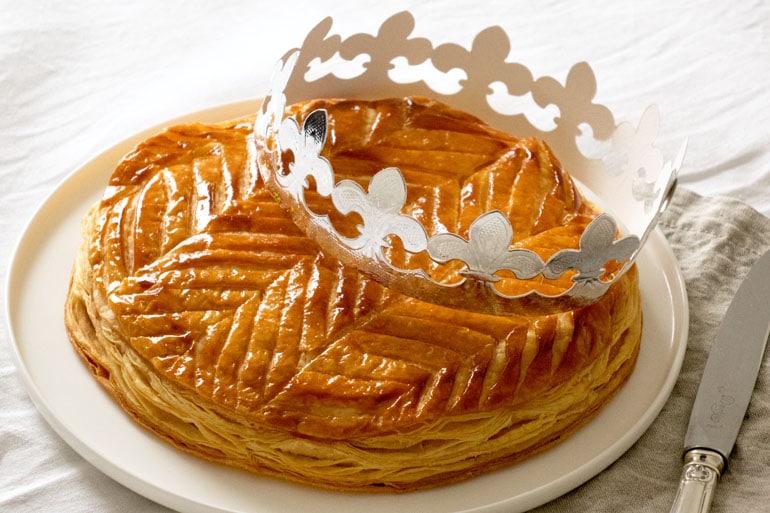 Come December you wil start to see the “Galettes des Rois” in bakeries and supermakets in France.

This pastry is readily available throughout the month of December, however tradition stipulates that this delicatessen is typically enjoyed on the “day of the epiphany January 6th.  Just like many traditions, demand has caused a shift in how and when it is sold and enjoyed.

Coming back on some tradition, this cake is typically something that brings a family together and is enjoyed after January 1st, generally the first Sunday after the new year.

Bakeries specializing in these cakes hold true to traditional time lines and you will find them sold after the New Year.

These cakes, as the name suggests, brings forth the king or queen of the family!  The cake is cut into as many slices as there are guests at the table.  The youngest and most nimble is under the table making the ciritical decision as to who gets which slice.  The goal being that everyone is hoping to ‘win’ the Roi/King – which in these days is a small porcelain figure hidden within the cake itself.   This is a tradition that dates back to the Romans and Middle Ages where the prize was a bean.

Once the King or Queen is found, they are crowned with a fancy cardboard crown and named the majesty for the day.

The galette des rois, which is eaten by ¾ of the French is made up of puff pastry and often topped with a fangipane (almond cream mixed with pastry cream).  In recent years, varying tastes have proffered a slew of different offerings ranging from chocolate or pistachio cream, hazelnut and applesauce to name a few.

Pastries are synonomyous with Paris and you can find these delectable eats made for every pocket book – some running as high as 58Euros where competition and style are fiercely fought over.    The vast majority of the Galettes are mass produced.

Southern France have their own take on the Galettes.  They are  enjoying a brioche in the shape of a crown very often sented with orange blossoms and decorated with candied fruit. 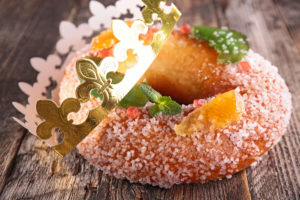 Food without drink is simply not permitted.  The favoured drink to accompany the Galette are cider, champagne or anything sparking.

For those who are kitchen whizzes and want to try their hand, recently I made my own galette and must admit that it was rather straight forward and the result impressive!  The secret lies in the puff pastry – it needs to be made with butter.   These are readily found in the grocery store.  Want to up the challenge ever further, then making it from scratch isn’t difficult.

Following the Chocolate and Zucchini recipe from Clothdile Dussolier – a bilingual culinary blog – was very helpful. I recommend the blog as she offers conversion guides as well as a French-English Food dictionary and her recipes are a modern and tasty take on tradition.

Do not hestitate to leave me your comments and send me photos of your homemade galette.